A modern building must be transparent, environmentally friendly, functional and safe. 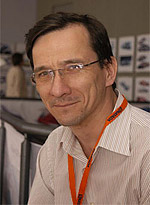 On May, 24th NAYADA Company held an open seminar in Chelyabinsk, which touched upon modern tendencies in architecture and design. Timur Bashkaev, a famous architect, the founder and the general manager of “ABTB” architectural bureau (Moscow) was invited as one of the experts.

Bashkaev’s architectural bureau has accomplished more than 300 projects, 50 of which have been realized. The largest projects are:

The main topic of the seminar was the current state and perspectives of architectural development in Chelyabinsk region on the example of a well-known project “Univercity”.

Using glass, which is highly popular nowadays both in external and interior constructions, adds the effect of transparency and openness to modern offices and trading centers. It visually enhances the space and allows not only see the inside of a building, but also to find a more effective solution to the problem of lighting.

Functionality is defined by a great density of population of cities, especially in business areas, as well as by high prices on land. This was the main reason of building high-altitude business centers with a great number of companies and people concentrated on relatively small territory. In such cases it is not often easy to create a design, which would be approved by all tenants. Thus open workplaces (open space) started to appear. They are used depending on the needs of each company. In these circumstances various partition systems, which are easily mounted and removed are often irreplaceable.

The question of fire safety has been raised not once lately. This problem particularly concerns modern offices overloaded with people and equipment. Specialists from NAYADA advise to deal with this problem by means of using fire alarm and firefighting systems together with fire-resistant office partitions and doors. NAYADA offers NAYADA-Fireproof fire-resistant partitions and doors able to withstand heat and smoke for about 90 minutes.

And the last (but not the least) modern trend is environmental safety. Not only interior items, but also walls and partitions must be made from ecologically friendly materials. Following this trend, NAYADA offers a wide choice of partitions made if glass, aluminum and other ecologically friendly materials. The company management system is certified according to the international standard ISO 9001:2000.