Press-center
Production Nayada
Main / Press-center / News / Winners of the international contest in the field of design and architecture, the ‘ArchChallenge 2013: Flex Offi

Winners of the international contest in the field of design and architecture, the ‘ArchChallenge 2013: Flex Offi 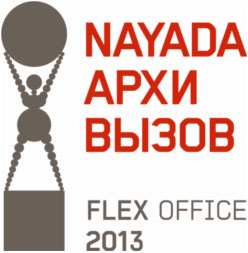 The ceremony of awarding the winners of the international contest in the field of design and architecture ‘ArchChallenge 2013: Flex Office’ will be held on November 26. The annual ArchChallenge contest, which has become a calling card of the NAYADA Company, first started in May 2013, in partnership with the ProjectNext Communications Agency.

Several key events were held as a part of the Flex Office (flexible office) competitive cycle – an introductory workshop was held, where leading Russian designers and architects spoke; a meeting was arranged with the winners of last year's competition, including Arseny Leonovich (winner of ArchChallenge 2012 in the “Furniture for Co-working” category – “Islands” workstation); and a tour was given of the production and logistics center of NAYADA.

Categories of the ‘ArchChallenge 2013: Flex Office’ are focused on the development of a “flexible scenario” of the working space, based on the principle of Open Space – Open Space workplaces, bench-systems, and communication and interaction areas.

The organizers have received more than 500 applications from 14 countries during the period of the contest (6 months). The call to participate was responded to by designers from Italy, France, Germany, Spain, India and Peru. As a result, 232 contest projects were received.

The results of this great creative work will be announced at the solemn award ceremony, where the names of 9 winners in 3 categories will be announced, as well as winners of special prizes given by the organizers and partners of the contest. Projects that were included onto the short-lists will be presented in the final exhibition.

The winners of another competition, revealing the needs and realities of modern office spaces – FotoChallege, will also receive their awards during the ceremony. The condition of the contest held on the ArchChallenge page on the social network Facebook, was to send a photo of your workplace, and indicate what changes the author would like to bring in.

Admission is free. Pre-registration is required. For accreditation of the media, please contact the organizers

About the competition:
The first ArchChallenge contest was held in 2005, under the name of ‘Office Space: Creativity, Technology, Innovation’ and became the first Russian creative contest in the field of office interiors and equipment design. More than 2,000 applications were accepted and many bright works were evaluated during the seven competition cycles. Some of them were implemented into the production program of NAYADA. Successful participation in the competition has become a key moment in the career for a number of designers.