This year the Russian Builders Association together with the trade union and the «Building» magazine decided to celebrate their professional holiday in a special way. In the run-up to the Builder’s Day they decided to organize an All-Russian futsal tournament for the teams representing Russian building companies. Such large-scale event is going to be held for the first time. It’s not surprising that more than 20 teams are taking part in the tournament, because futsal, just like the work of builders, is characterized by the team spirit.

NAYADA was among those who rose to the challenge.

On July, 28th 22 teams from different regions of Russia will roll out to the “Yantar” stadium in Moscow. The claim to be called the best will be urged by the teams from the following companies: «Grand-Story» (Yekaterinburg), «TEMP-XXI century» (Moscow), «Smolensky plant ZhBI-2», «Trust Ufagrazhdanstroy» (Ufa), «Moscow Real Estate Agency», «Karacharovsky Mechanical Plant» (Moscow), «Voronezhsky plant of constructing materials», «Balikoti» Group of Companies (Moscow), etc. 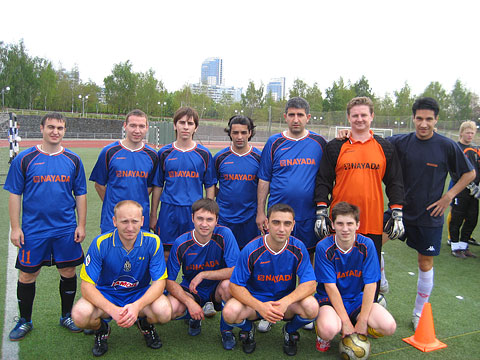 NAYADA team will consist of:

The rival of NAYDA will be known after a ballot, which will be held a day before the tournament, on July, 27th.

We invite you to “Yantar” stadium (Katukova St., 26) on the 28th of July to watch the games and support your favourite team. The doors will be open from 10 a.m. for all the guests.