For several years now, the NAYADA Company has been monitoring the progress of the project involving the creation of new multi-functional interior space of the Beethoven Hall at the legendary Bolshoi Theater. After extensive restoration work, completed in 2012, concerts are now held here regularly. As of today, the interior of the hall has acquired its final look. 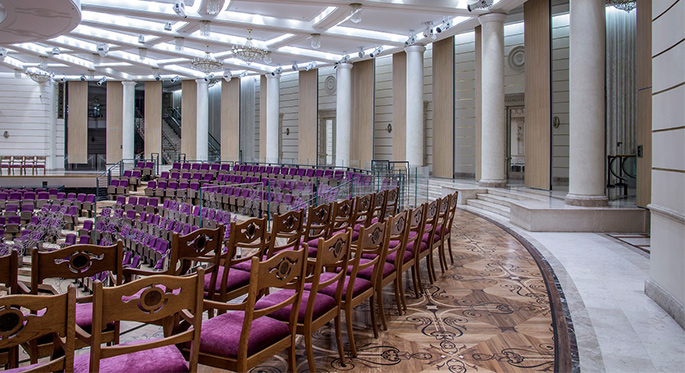 The Beethoven Hall is a new concert hall of the Bolshoi Theater. One of the main characteristics of ​​this new hall – is its acoustics, thanks to which it is now being used for both concerts and rehearsals. This has become one of the best concert venues in Moscow.

The NAYADA Company has managed to create acoustic sliding partitions for this multifunctional hall. The Beethoven Hall has a limited area, and thus the sound pressure in it is very high (a variety of activities has been held here, ranging from solo performances to rehearsals of the symphony orchestra). An additional complexity here was the multilevel radial partitions located around the periphery – which required careful technical work. This was no easy task – and so the experts at NAYADA tracked the effectiveness of the installed structures during a period of four years.

Thanks to the installed NAYADA-Hufcor partitions, in a matter of minutes, this hall can be turned into chamber, or become a platform for rehearsals, in which 130 musicians can practice simultaneously. This system consists of 32 sections (including 4 two-leaf doors). The construction is laid out in an arc – each section adjoins the neighboring one at an angle of about 4 degrees, with the podium being set in the middle. Each section weighs about 430 kg., while the entire partition system weighs more than 13 tons! The partition section facing the inside of the premises is decorated with special sound-absorbing panels, thus providing maximum soundproofing of 54 dB. A mixed finishing was used on the panels, using wallpaper, veneers and mirrors with an aging effect. 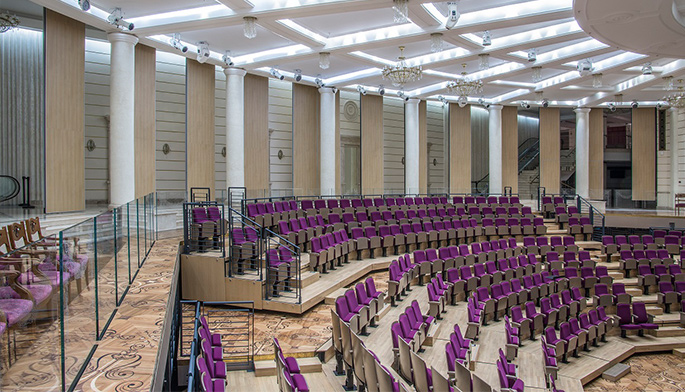 After many years of operation, the mounted NAYADA-Hufcor partitions have proven their reliability and design efficiency.

Beethoven Hall got its name on February 18, 1921 in honor of the 150th anniversary of the birth of Ludwig van Beethoven. Before the 1917 Revolution, this was the Imperial Lobby, decorated in the traditions of that time. Today these vintage interiors have been restored and are available for enjoyment by connoisseurs: ceiling decorated by Old Italian molding, luxurious crystal chandeliers, walls upholstered in embroidered satin. However, it rarely opened its doors to the public. Open concerts started being held here often only in the mid-1980s. The first significant restoration of the Beethoven Hall took place in the 1970s. A new reconstruction project 2009-2012 included the renovation of the interior of the Imperial Lobby, which has been fully restored, including the imperial symbols that were removed during the Soviet era. The concert platform was moved to underground premises, located under Teatralnaya Square. The modern Beethoven Hall has been equipped with the latest technologies with excellent acoustics.