Press-center
Production Nayada
Main / Press-center / News / NAYADA received a diploma «For the contribution to the progress of the real estate market in Russia».

NAYADA received a diploma «For the contribution to the progress of the real estate market in Russia».

In September NAYADA Company took part in the International Investment Forum PROEstate-2007, which was held in Saint Petersburg. 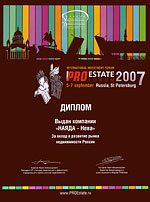 Within the frames of the Forum the results of the competition «The best realised project on the real estate market» FIABCI-Russia were summarised. Four winners from Russia will take part in the international contest. NAYADA sponsored the competition in the nomination «Commercial Real Estate». The first prize in the nomination was taken by the Saint-Petersburg trading entertainment center «Iyun».

The results of the competition were summarised at reception of the Saint Petersburg governor Valentina Matvienko. According to the president of jury of the international competition FIABCI-Russia Kumar Tarmalingkhama, «Two of the four Russian projects have decent chances to win the international contest». However Mr. Tarmalingkhama didn't unveil the names of those projects.

NAYADA Company not only took part in the award ceremony, but also received a honorary diploma «For the contribution to the progress of the real estate market in Russia».