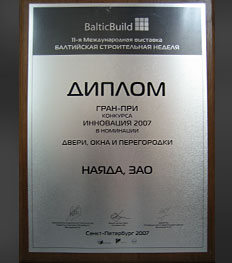 Last week on Sept. 12-15 the «Baltic Construction Week» took place in Saint Petersburg. NAYADA Company not only became a member of this prestigious exhibition but also received a Grand Prix in the nomination «Doors, Windows and Partitions» of the «INNOVATION 2007» competition.

The award ceremony took place Sept. 11 during the reception organized by the governor of Saint Petersburg Valentina Matvienko together with Petersburg Building Center and PRIMEXPO exhibition company in «Astoria» hotel. NAYADA Company received a diploma and a special prise – a composition made of a meteorite.