By the beginning of summer NAYADA had accomplished a range of new projects, its specialists having organized space of many offices, shopping malls and private interiors. In the period from April till May the company completed nearly 300 projects, the most popular solution being a classical office partition in aluminum profile, a NAYADA-Standart system. 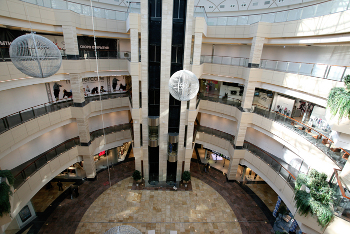 For a Forpost company, which processes and distributes red caviar., as well as for our regular customer, automobile plant RENAULT-Avtoframos multifunctional and aesthetically flawless (and therefore, so popular) NAYADA-Standart partitoions were produced.

The choice of Gazprom Expo is worth mentioning. The company made it in favor of NAYADA-Intero system, which combines transparency, solidity and aesthetics. Exclusive NAYADA-Intero partitions and two doors were used in the office of Gazprom Expo. One of the doors was made of anodized profile covered with a film on the glass with a pattern created by a famous designer.

The producer group of STS television company, which takes three floors of the MONARKH business center decided to decorate its office with NAYADA-Crystal partitions with tinted glass and also install table tops under washers made of waterproof plastic.

A french legal company GLN was also attracted by the lightness and safety of NAYADA-Crystal construction, as well as by the fact that these systems can turn into a mere work of art thanks to modern technologies of applying decorative pattern onto the glass. GLN decorated its office with partitions with veneered doors and installed 6 reception units finished with natural anegri colored wood veneer with drawer units and bookcases.

An entrance group composed of inside all-glass door, external air door, NAYADА-Parapetto system, and NAYADA-Standart partition with brown profile and film on the glass was installed in Yves Rocher showroom. Within the shortest term NAYADA finished the negotiations room in BIOKARD scientific and research center with NAYADA-Standart partitions with mattng applied with the help of a stencil offered by the customer.

Facility Services Rus managing company decorated a training hall for its tenant Dell , which offers its services to customers. It installed white NAYADA-Hufcor H100(K) partitions with sound insulation of 42 dB! In the process of project realization NAYADA specialists managed to solve technical problems connected with designing a non-standard connection between the partition and a separating wall.

NAYADA partitions are not only safe and beautiful, they are cross functional. This was proved in the process of designing the interior of a private apartment. The idea was to separate the kitchen from a room. To solve this task, the specialists used a NAYADA-Hufcor G3000 system decorated with wenge and matte glass designed by Dmitriev.

Yet again NAYADA constructions open new planes in our perception of flexibility and volume and convey an absolute freedom of space.