NAYADA site became a nominee in the competition among building sites. 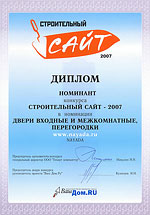 The results of the competition between building sites held by the building portal "Vash Dom” in Moscow have been summed up. More than a hundred professional sites were presented to the jury. NAYADA Company received the award in the nomination “Entrance and interior doors, partitions”.

However the popularity of a site does not depend only on high ratings and points given by the jurors, but also on the opinion of average internet users. For instance, in April the amount of visitors of www.nayada.ru per day reached 1000 people. Today the site of NAYADA company may be called one of the most “attended” among the Russian professional sites in this industry.