As has become the tradition at the beginning of each new year, NAYADA summarizes its achievements in the year just past. And 2015 turned out to be very rich year indeed for NAYADA – the company celebrated its 20th anniversary, presented new developments in the “12 Architects Create Furniture” project at the I Saloni 2015 in Milan, became a strategic partner in the green architecture sphere – the Eko_Tektonika in the Yasno Pole Ecopark, and of course, also implemented a number of significant projects. Here we present an overview of the main events of the NAYADA Company in 2015.

During 2015, NAYADA created thousands of new beautiful spaces in Russia and the CIS countries. More than 2,000 projects were implemented in the Moscow Region, and in total for the year, the company completed more than 3,500 projects.

NAYADA continues to work with its regular customers and partners, as well as with new customers. In 2015, NAYADA participated in such major projects as the Garage Museum of Modern Art, the Central Children’s Store, Pernod Ricard Rouss, Dominion Tower, Vodnoy SEC, Yandex office, Columbus SEC, Aviapark SEC, Alfa Bank office, Chkalovsky Military Airport, Eurasia Tower, and many, many others.

The Pernod Ricard Rouss, in which NAYADA participated, received the Grand Prix at the Best Office Awards 2015. Today, 113 NAYADA projects are included in the NEXT Rating of supplier companies.

NAYADA represented Russia, with its latest furniture collections of the international project “12 Architects Create Furniture”, at the largest international exhibition of the furniture industry and interior accessories – the Salone Internazionale del Mobile 2015 in Milan. Introduced for the first time at the company’s stand were such novelties as PIGRECO in lightweight concrete by Luca Scacchetti, the GEMSTONE desk for executives by Francesco Morena, TOUCH by Marco Piva, and the updated SPEECH collection by Sergey Choban and Sergey Kuznetsov. A laconic part of the exhibition was also the display of the main products of the NAYADA Company – the company’s own partitions and doors. 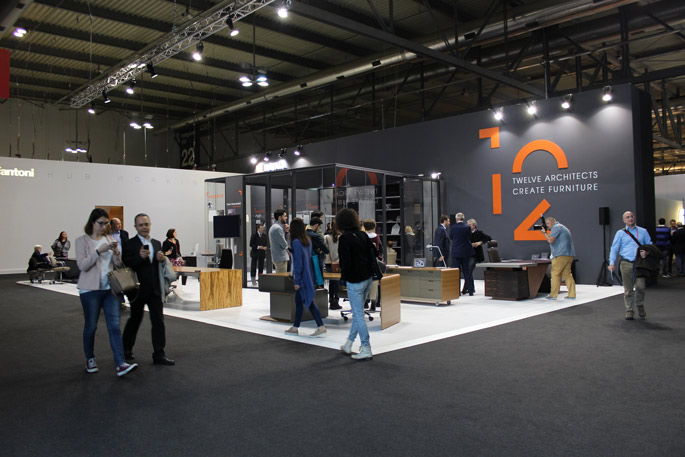 The highlight of the program was the presentation of new products in NAYADA’s “12 Architects Create Furniture” in the creative format “Work – Create – Enjoy”. Together with Italian architects, participants in the project, NAYADA created a real “Art Expression” at its booth. The authors of the furniture collections, whose works were presented at the booth, were tasked with creating an emotional portrait of their office furniture collections. The end-result was the creation of original authors’ paintings, in which can be traced the philosophy behind each furniture collection.

NAYADA keeps expanding its presence not only in the regions of Russia, but also abroad. The Company announced the opening of a representative office in the Kingdom of Saudi Arabia. The official signing of the agreement took place during the Russian-Saudi Business and Investment Forum in Moscow. The new office will service the entire Middle East Region.

NAYADA Company became a strategic partner of Russia’s first open-air festivalof green architecture and technology – the Eko_Tektonika in the Yasno Pole Ecopark.. The highlight of the festival was the presentation of ideas for the creation of a new development of the territory of the Yasno Pole Ecopark and the Eko_Tektonika awards ceremonies. For the festival in the Ecopark, the architect Vladimir Kuzmin created several new objects – the architectural objects “Ball” and “Portal”, as well as a large dining table.

On August 9, 2015, the NAYADA Company celebrated its jubilee – 20 years since its inception! During the 20th Anniversary Celebrations employees were presented with the NAYADA-20 Years-Awards for the best projects of the company. The recipients of the awards were 16 projects and 120 employees that implemented them – these were in the nominations Pride of the Country, Technological Power, Beauty of the Year, Infinite Space, and others. In addition, 80 NAYADA employees were individually recognized for their hard work and dedication to the company – in the nominations Reliable Back-End Support, Master of One’s Craft, Creator of Beauty, True Partner, Wise Mentor, and Breakthrough of the Year.

This is how rich and interesting the year 2015 was for the NAYADA Company. Ahead lies a lot more work and plans for the year ahead – 2016!