NAYADA football team survived close competition and managed to win a BRONZE PLAY OFF CUP. 20 amateur corporate teams including our sportsmen took part in the annual tournament held in the memory of legendary football player K. I. Beskov.

After qualifying for the entry NAYADA successfully reached semi final where it clashed «Deloshop» team and beat it 2:1 (Alexey Afanasyev and Sergei Streltsov scored the goals).

In the finals NAYADA football players encountered the team of sports website «Sport.ru». The game was quite dramatic, and our opponents were really skillful and persistent in the goal-line stand, but one of the most promising NAYADA players Gaji Pamazanov managed to get round both, the defenders and the goal keeper and finally score a goal. The only thing the latter could do is to get the ball out of the gate. The game ended with the score 1:0. 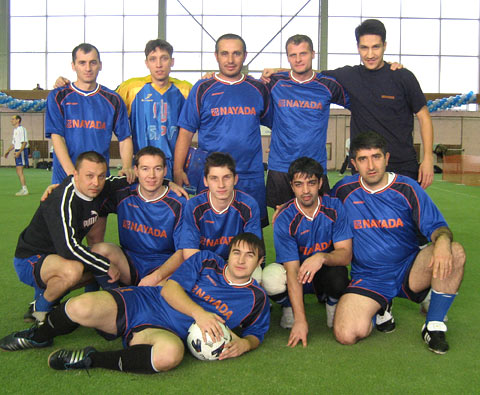 In the long run NAYADA got the BRONZE PLAY OFF CUP from Georgy Yartsev, the veteran and the legend of soviet football, who noted excellent level of training of our football players and their will-to-win spirit.