Transformation – is the quintessence of every theatrical activity, it permeates everything, including the interiors. In the renovated Stanislavsky Drama Theater, the special atmosphere begins long before you reach the stage. The two restored buildings now hold the small stage, drapery, wardrobe and decorations workshops, as well as the theater with its huge foyer and exhibition space. The NAYADA Company worked on two phases of the reconstruction of this theater – in the years 2014 and 2016, installing a number of NAYADA-SmartWall transformable acoustic systems.

The renovation project of this historic building was designed by architects from Wowhaus Studio. Despite the fact that this Studio already had experience with theaters, the design team needed help – because the Electrotheater had to be as functional and technological as possible. The special pride of Wowhaus is the large transformer-auditorium for 400 people, with all walls being covered by acoustic panels. 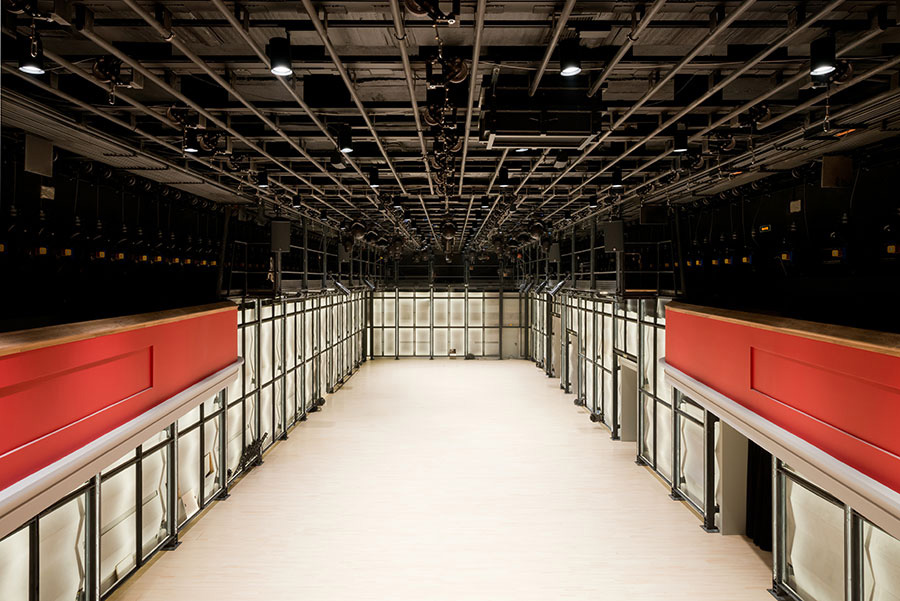 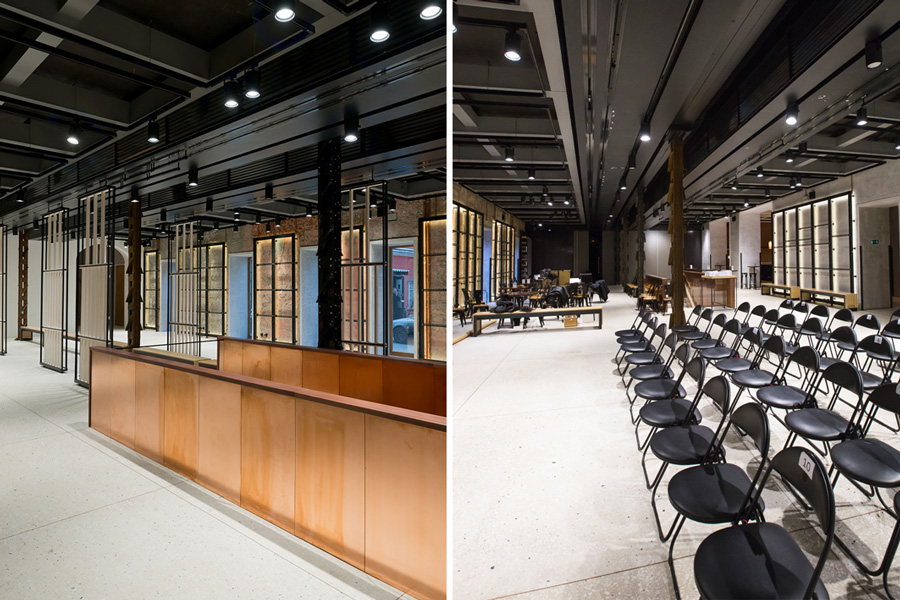 The SmartWall h7K transformable acoustic partitions, with sound insulation level of 54 dB and consisting of 5 sections, open up the space for the metaphorical leap into another world – the world of the spectacle. The auditorium and foyer are on different levels, and behind the partition is a staircase, leading down to the level of the stage. 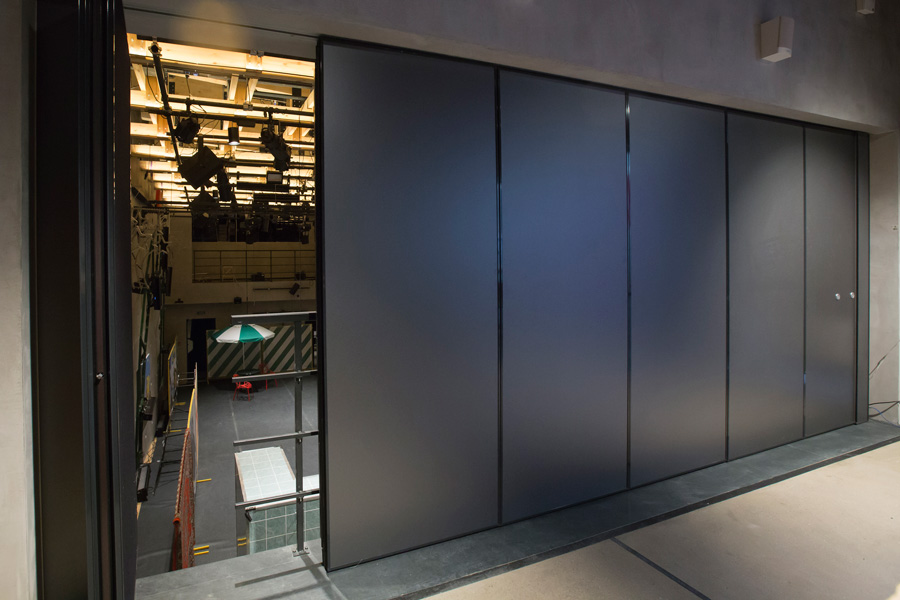 Sections from the foyer side are decorated with laminated particleboard in graphite-black color, and the auditorium side in black felt, which absorbs sound and prevents echoes from occurring. The partition creates a sound barrier, and at the same time, it is also part of the sound system of the auditorium. 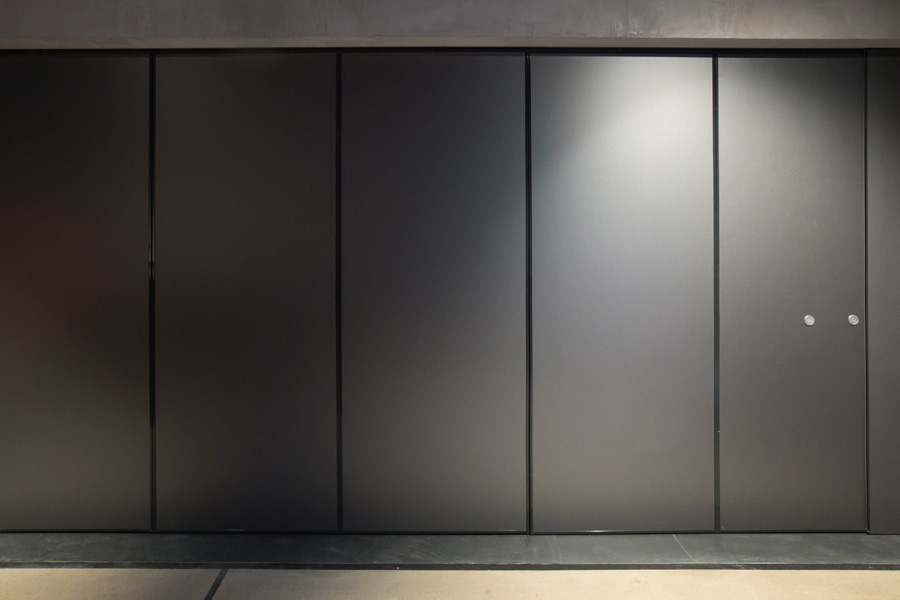 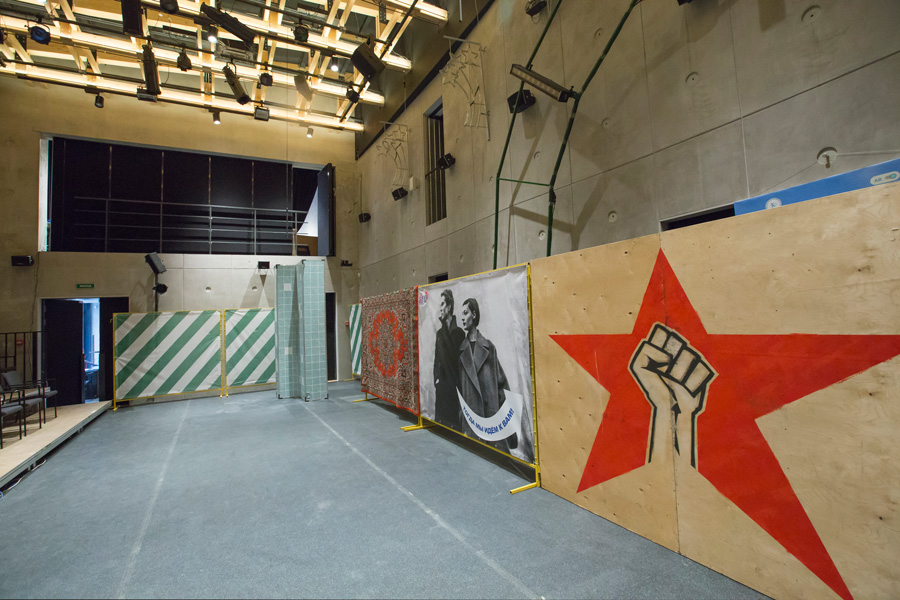 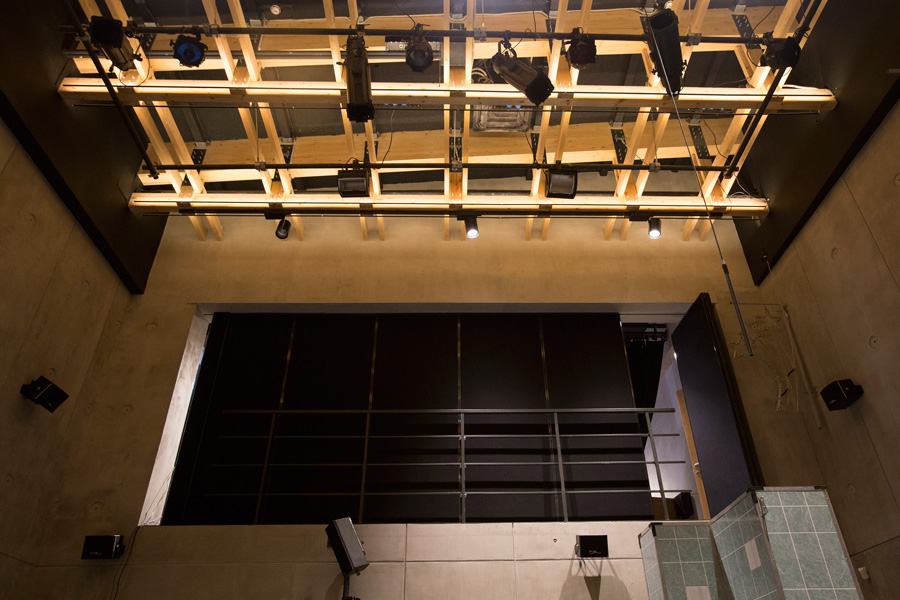 The variability of decorative finishes allows maintaining the general concept and style of the interior, as well as giving an additional function to the surface of the partition-wall. All profiles of installed constructions are painted in RAL black.

In addition to this solution, earlier, several interiors were created in the Stanislavsky Electrotheater using NAYADA-SmartWall transformer partitions.

The multifunctional NAYADA-SmartWall sliding partitions can create premises for the cafe, local representations or parts of a theatrical play. The high level of sound insulation allows the creation of a true wall, dividing a large space into several completely isolated rooms, when necessary. 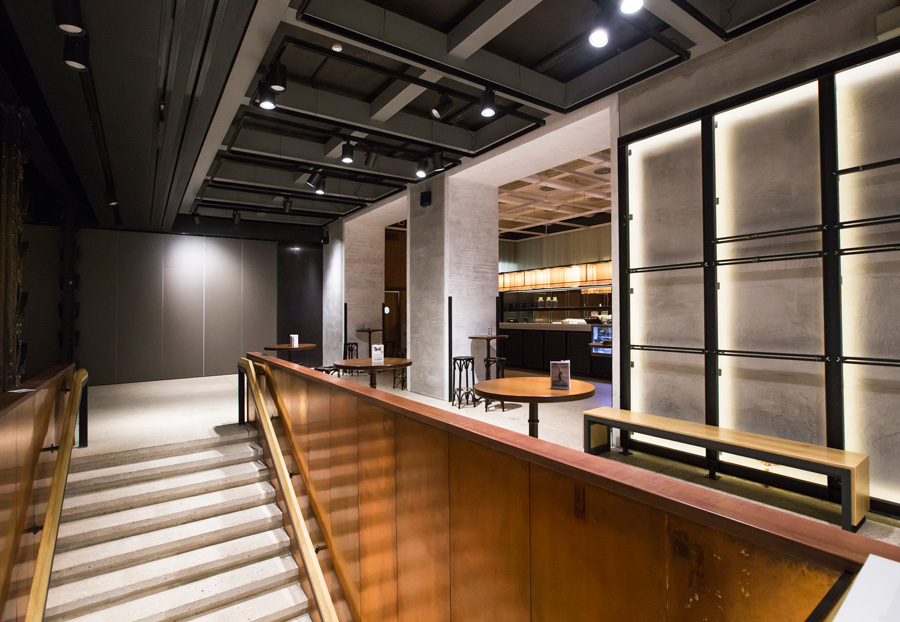 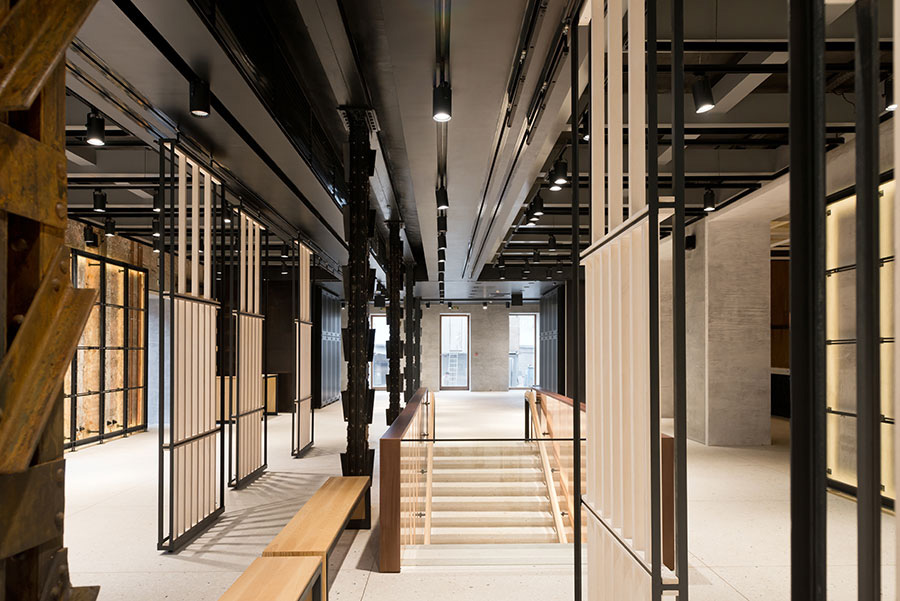 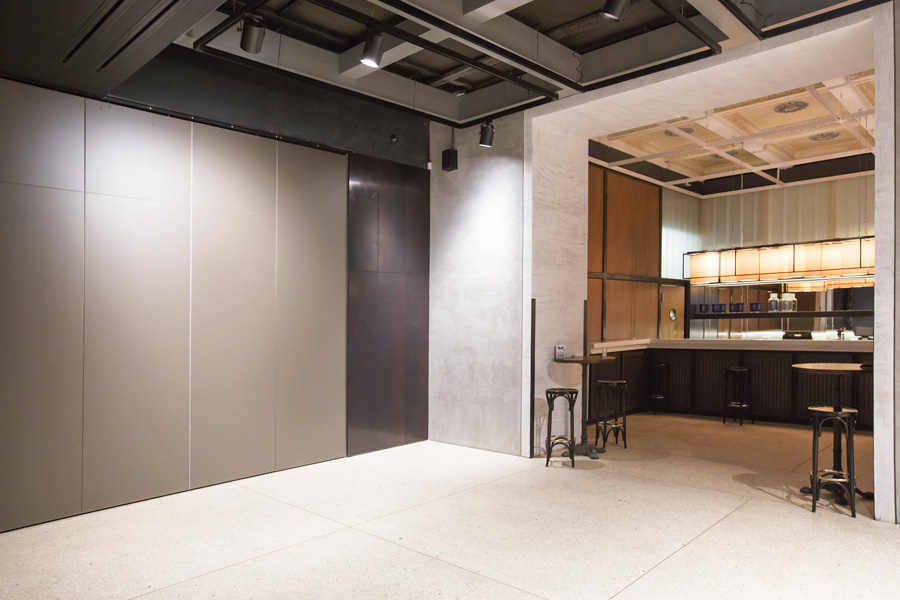 On the ground floor, the wide space between the auditorium and the technical premises is separated by eight sections of the NAYADA-SmartWall h7 system. Four parallel tracks, 20 meters long, along which the partitions move, cross the entire space of the auditorium. Their function is to allow the auditorium to be transformed into premises of any desired configuration. Along these ceiling rails, various panels can be moved, such as panels that are attached to special power tubes with rollers. 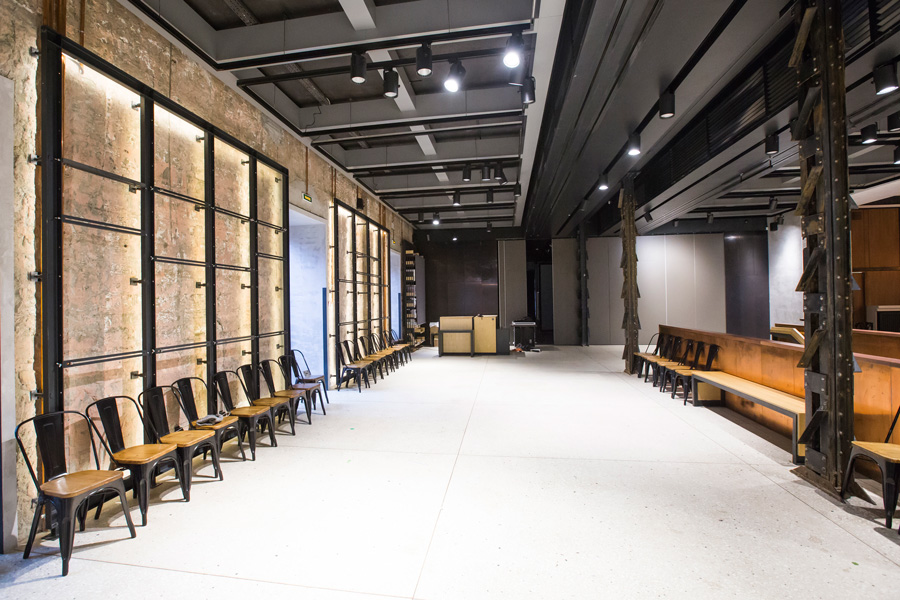 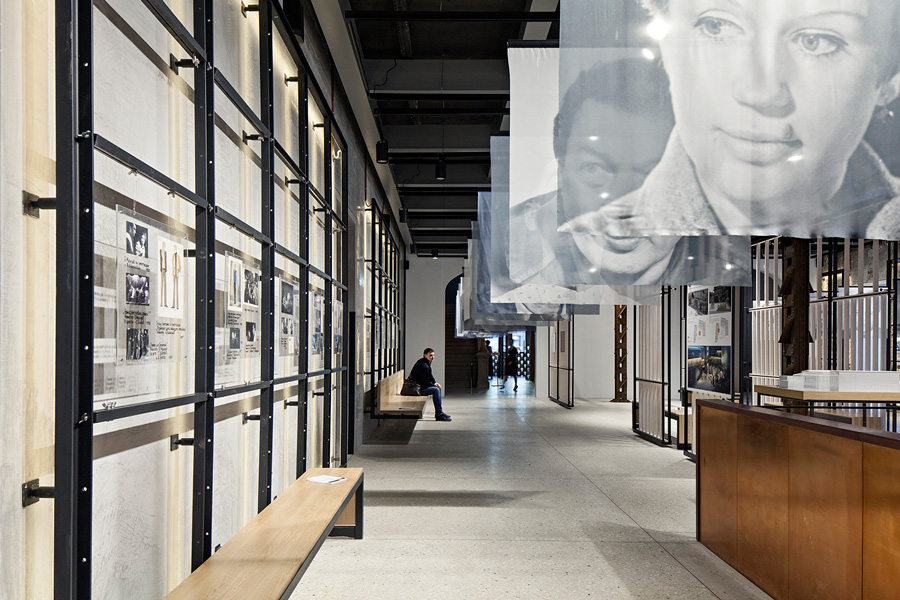 Stanislavsky Electrotheater– is a creative territory, the center of which is the renovated Stanislavsky Drama Theater. The theater is located on the main city artery of Moscow, at 23 Tverskaya Street. Since 1915, the popular cinema Electro APC was located here, after the revolution, not far from here, operated the Stanislavsky Opera-dramatic studios, which later turned into the drama theater, which was named after the teacher, the experimenter, and creator of the Russian directors theater, Konstantin Sergeevich Stanislavsky. The symbolic heritage of these three elements – drama theater, opera-dramatic studios and cinema – are now being carried forward into the new era by the Stanislavsky Electrotheater.