Technological and non-standard: NAYADA for the NIRIT-Xinwei office

NAYADA developed some non-standard solutions for the office of NIRIT-Xinwei, a Russian-Chinese high-tech company. The interior of the office is a reflections of the company's technological direction with super ergonomics. The authors of the project are the Spline-design Design Studios. 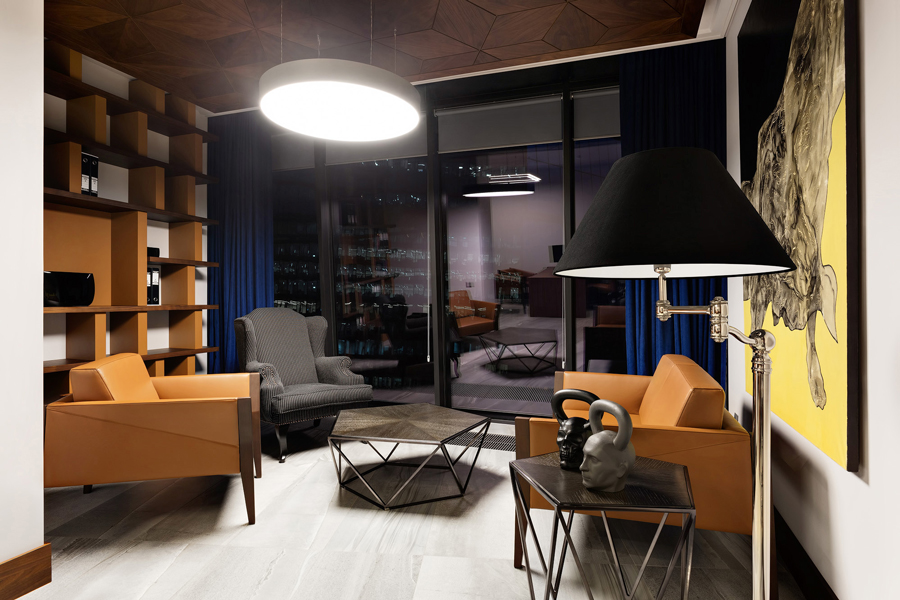 The openness of space became the basis for the concept of the entire interior. All working premises are separated from the corridor by NAYADA-Crystal all-glass partitions. The layout of the premises does not have any parallel lines – all partitions diverge at an angle, fanning out. 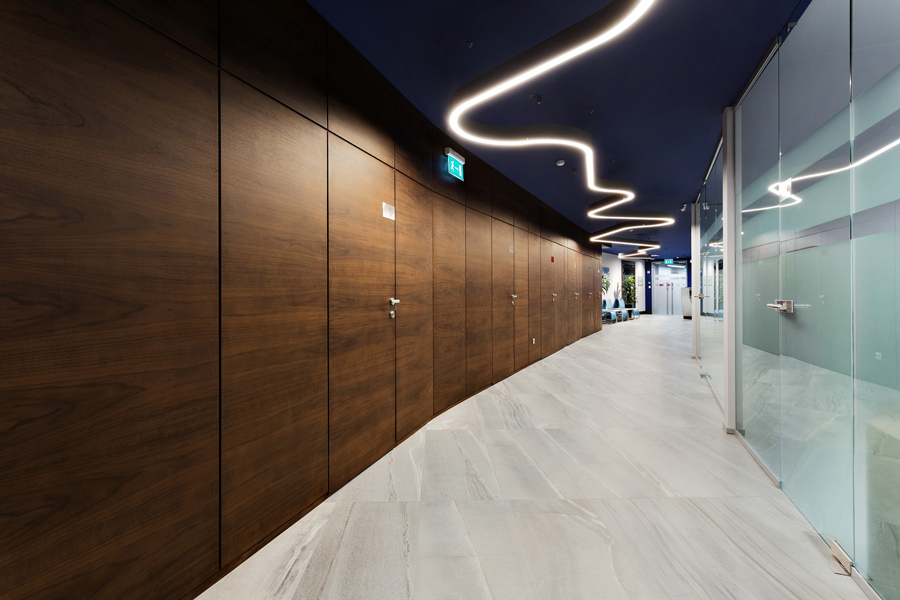 The transparent surfaces are covered with a matte film made of striped patterns of "hoarfrost". The designs of the images were developed to ensure that employees sitting at desks do not become distracted by what is happening outside their private offices, while at the same time, the natural lighting and the integrity of the entire office are preserved as much as possible. The all-glass built-in doors are equipped with an access control system. 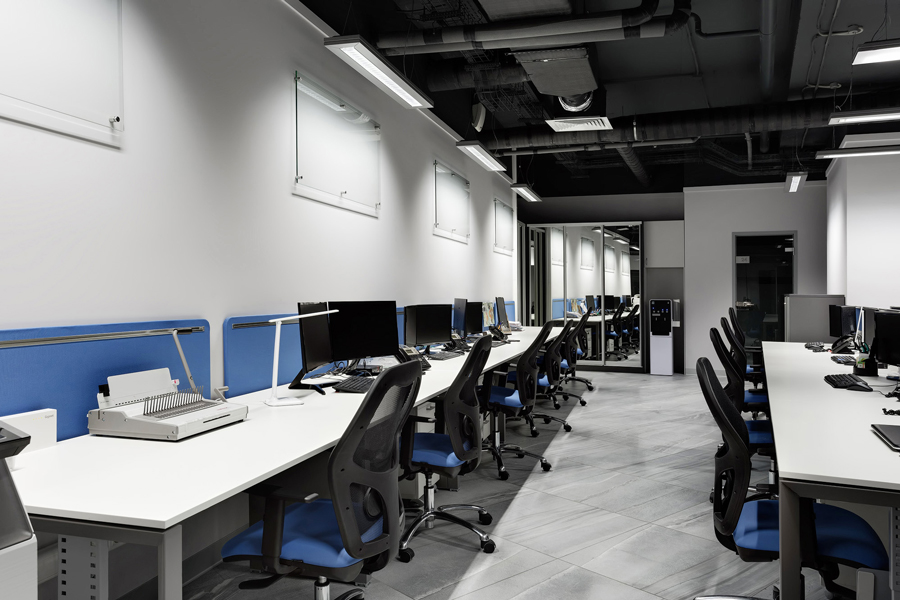 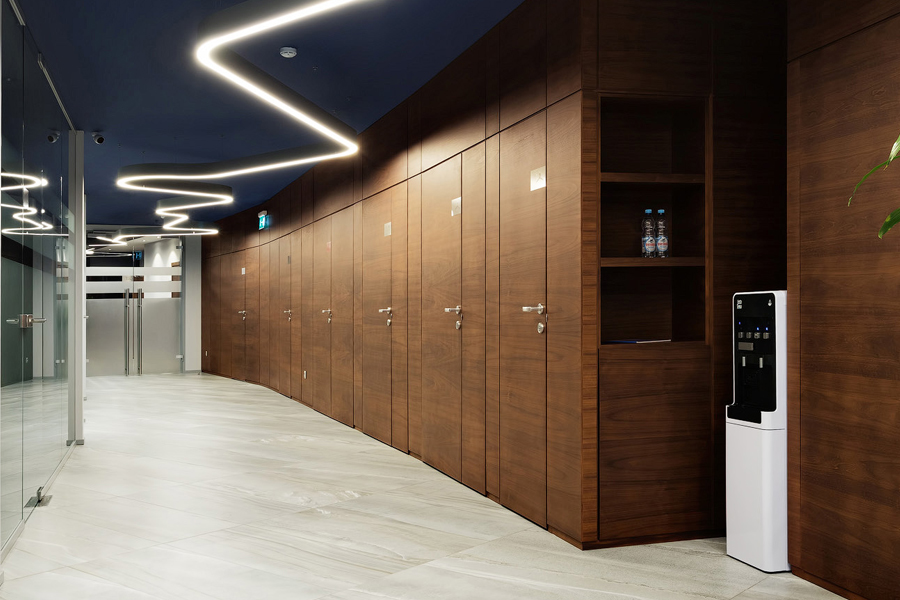 The authors of this project paid special attention to the entrance zone, as the main public face of the office. The NAYADA-Regina marble reception desk is illuminated with a linear hanging lamp. The rack itself symbolizes strength, stability, and solidity. The combinations of skillfully selected textures effectively combine to maintain the concept and corporate identity of the company. The use of glass preserves the natural lighting, and its reflective ability works to make the transit zones appear larger. For example, deep blue, which is a corporate color, is used both on wall fragments and on the ceiling of the transit zone, giving depth to the premises. 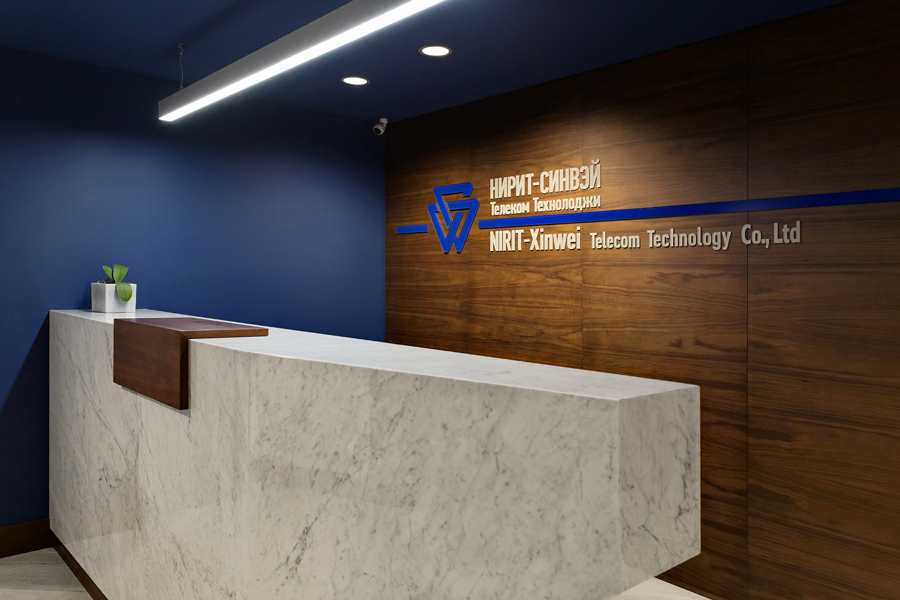 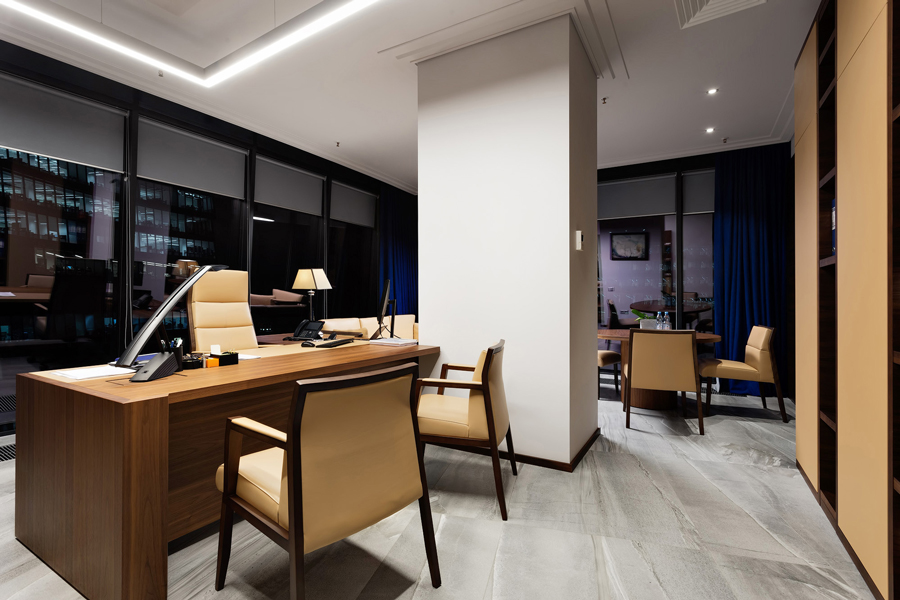 The interior is more representative: it uses special elements of decoration, massive furniture made of natural wood. Cabinets, fancy shelving, built-in furniture, and niches were made by NAYADA from American walnut veneer. 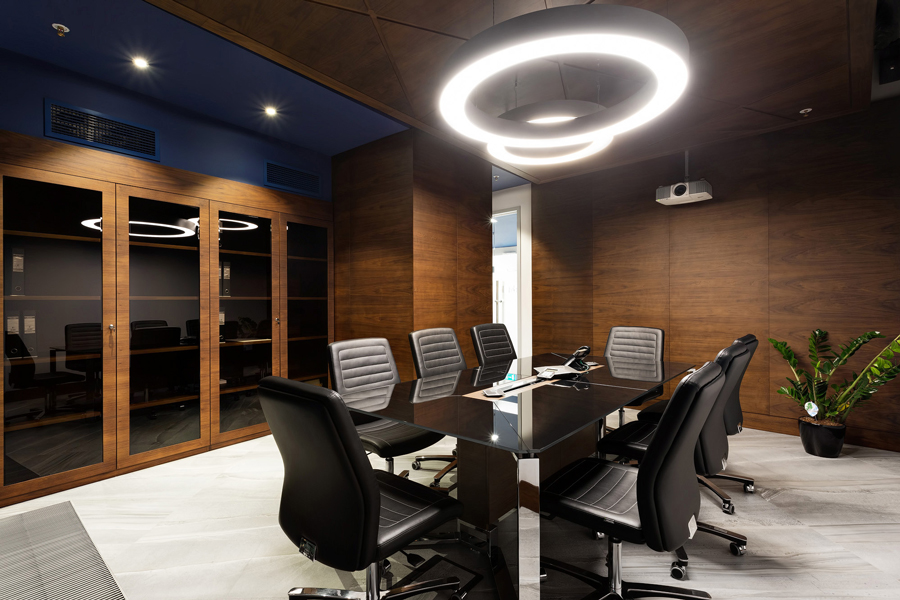 For this project, NAYADA created unique overhead and suspended structures – for example, a flat model of the Earth from veneer hangs on the wall. 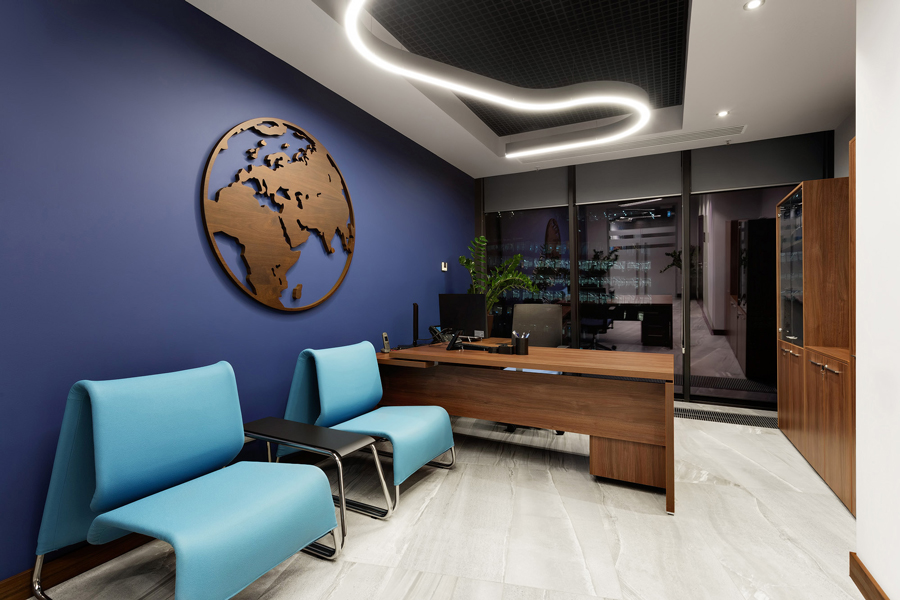 And in the director's office, they placed a decorative rusticated panel of a complex configuration, composed of individual parts and symbolizing a hexagonal honeycomb, as this company provides cellular communications. Using the same method, the zone was separated, from the rest of the office, for negotiations, making it autonomous and conducive to open dialogue. 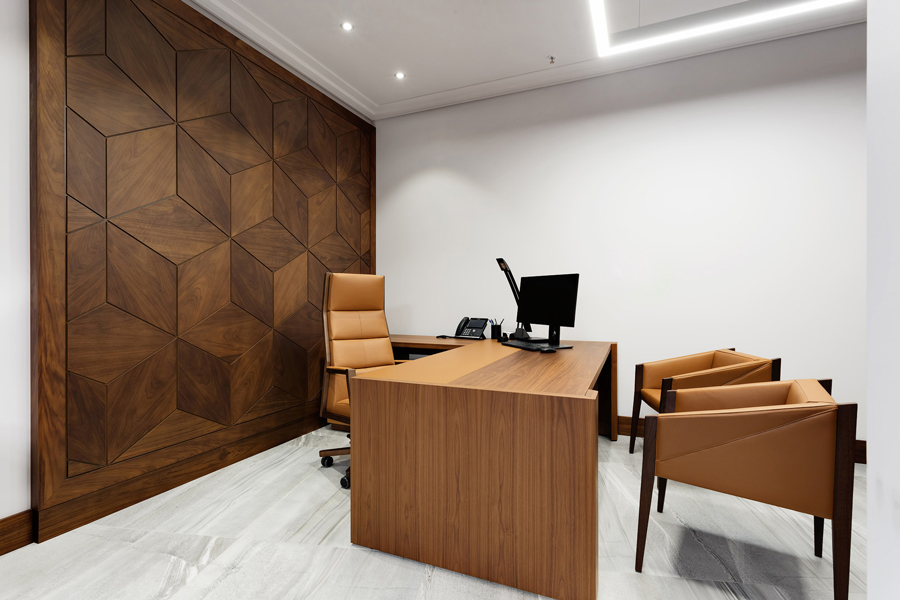 Both meeting rooms are made in the same style, which connect the general and management zones, although they have different interiors. With the help of NAYADA-Regina panels, which increase the sound insulation and give speciousness to a room, it was possible to keep the overall style of the entire office. 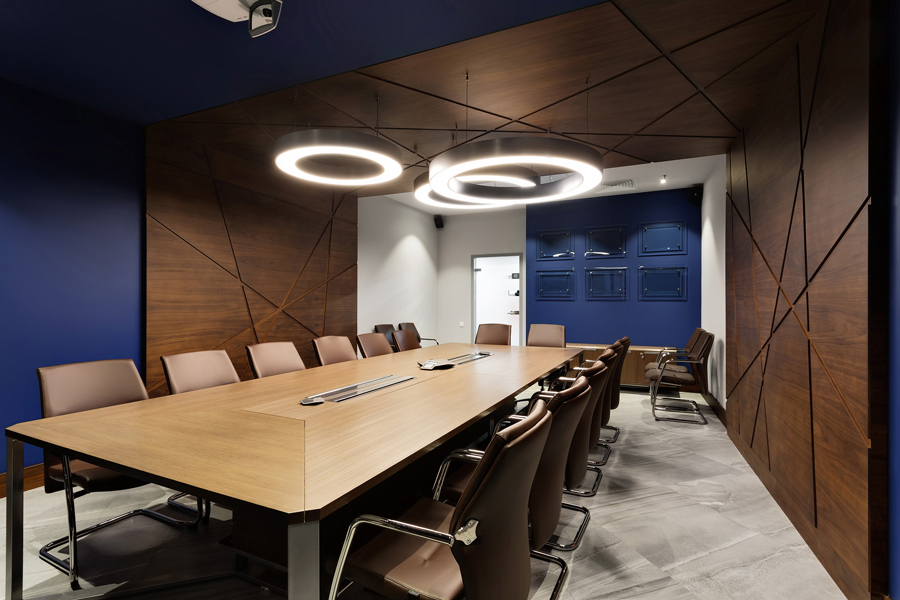 In the entrance group, there is a NAYADA-Fireproof double fire door, decorated with mass-toned glass with RAL perimeter coloring in the profile color. The door is equipped with concealed door closers and gas-impermeable thresholds. 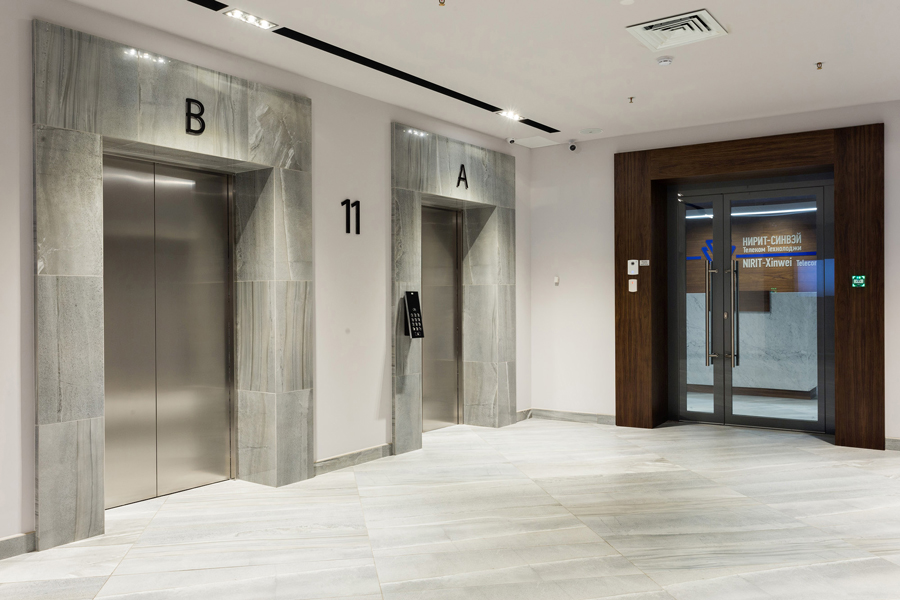 "This project was very complicated, but interesting. We set ourselves the task of preserving the uniqueness of the architecture, carrying out the design of the office using the latest technologies, keeping the transparency of the interior as much as possible, but at the same time, creating a sense of reliability in it. I would like to express my special gratitude to the companies that took on the production and supply of the furniture, glass partitions and decorative panels, to the ALFA M and NAYADA companies. As a result of our common efforts, the customer was very pleased!" commented Victoria Smirnova, the project architect.