Press-center
Production Nayada
Main / Press-center / News / The number of nominations in the Archcompetition is growing...

The number of nominations in the Archcompetition is growing...

Archcompetition is approaching to the most exciting stage. On August 17th the Russian Architects’ Association opened an exhibition of works created by the participants of the II International competition for architects and designers «Office Space: creativity, technologies, innovations». The exposition holds up to 100competitive designs in the nominations: 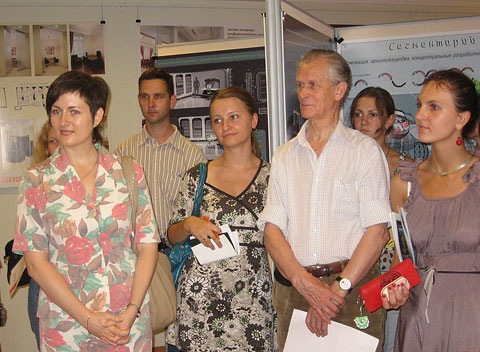 The spacious lobby of the Russian Architects’ Association seemed to be not large enough to accept all the visitors willing to take a look at the participants’ works. Among the visitors there were not only authors of designs, but also well-known architects, the representatives of the Architects’ Association, journalists and the jurors. Although the members of jury are often described as strict, in this case the best epithet would be "enthusiastic”.

One of the jurors, a famous architect and professor Mikhail Khazanov said: «The most difficult thing is to do something simple – a stool, a stand, or a partition. Judging by the present-day, we can tell that the participants have done the job well. I would also like to point out that any well organized competition is a great opportunity for a participant to express himself, and for the organizer to join creative and progressive young people together. One cannot neglect the fact that almost all famous architects of the present day, such as Belov, Skuratov, Velichkin, Plotkin, etc. started their career taking part in professional competitions, and today many of them have acquired the international status and became mentors for the future generations of designers. I hope this competition will become one of the most important international events in the world of architecture, to discover genuine talents and bring them together».

Khazanov was supported by other jurors. According to the chief architect of «Architectural-Artistic Workshops», professor of Moscow Architectural Institute Dmitry Velichkin, «It is too early to speak about the winners. However I cannot but agree that a lot of works demonstrate not only great imagination of authors, but also their maturity».

Elena Kryzhevskaya, the chief architect of «ABD» architectural workshop, is included in the panel of judges for the second time in a row. She pointed out that «the works are characterized by the incredible dynamics and progress. This year I see not only more works, but more complete, original and creative works. Looking at all those projects it is very hard to choose the best ones».

Mass Media also made a contribution to the compliments addressed to the participants. Almost every one agreed that 9 winners are not enough, considering the number of interesting works presented to the competition. Thus already at the exhibition it became obvious that the number of winners will be extended to at least 13. The «Tatlin», «100% office», «Office Interior» and «Project Russia» magazines announced that they are going to introduce their own awards for the works they especially liked.

Unlike the jurors, the participants were less emotional and enthusiastic, but their works could express a lot more than words. Thus, the winner of the last year in the nomination «Archembodiment» Dmitry Melitonyan decided to make a second attempt to win this year and presented two projects.

The names of winners will be announced at the award ceremony, which will be held in October during the «Zodchestvo 2007» festival. But already at this stage all the people who attended the exhibition have the opportunity to establish a new nomination «The Viewer’s Choice». According to the NAYADA marketing director Anna Kuznetsova, «Of course, only the professional jurors can estimate the works in a proper way, but we would like to give people a chance to express their opinion. When we established this competition together with Russian Architects’ Association, we wanted to introduce the idea that a modern office should be not only functional and comfortable, but it should also create the atmosphere of joy, because nowadays we spend in the office the major part of our lives».

The organizers of the competition, NAYADA Company and Russian Architects’ Association, invite every one to attend the exhibition, which is being held from August 17th till September 10th in the Architects’ Association building (Granatny Lane, 12) and choose the best projects. Those who can’t attend the exhibition are able to vote for the best project at www.archiconcurs.ru. The virtual exposition will be open August 30th – October 1st.