The winners of the ArchCompetition will be announced on September 30th 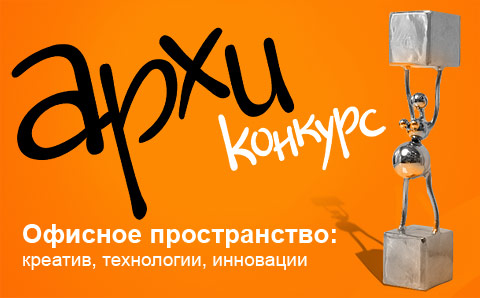 The 3rd International architectural competition «Office Space: creativity, technologies, innovations» is at its closing stage. The long-awaited exposition of competitive projects will be held on September 19th in the Russian Architects' Association building in Granatny lane, 12.

After the projects are finalized according to the Contest Regulations, there will be presented about 100 designs in the following nominations:

You are welcome to have a look at the competitive projects on September 30th. If you don't have the opportunity to be present at САР on that day, you may attend the virtual exposition at www.archiconcurs.ru. Here you can not only view the works but also vote for the best projects and chose the winner of People's Choice Award. According to the contest terms and conditions, the names of the winners will not be announced until September 30th. The final poll of judges will be also held on September 30th. This year the number of jurors will be extended. The committee of experts includes such famous architects as Sergei Choban (the leader of NPS Tchoban Voss architectural bureau in Berlin), a partner of "SPeeCH" association (moscow) and Luciano Capaldo, the president of RICS in Europe, the honorary member of the Royal Arts Society in Great Britain.

The names of the contest winners will be announced at he award ceremony, which will be held on October 18th within the frames of Zodchestvo2008 festival.

NAYADA company holds a training seminar in Tula.
All news