The second All-Russia Festival of Green Architecture and Ecological Lifestyle – the Eko_tektonika 2016 was held at a promising new area for living and recreation in harmony with nature, the Ecopark Yasno Pole. The NAYADA Company was a strategic partner of this event. Festival Organizer is the National Agency for Sustainable Development. 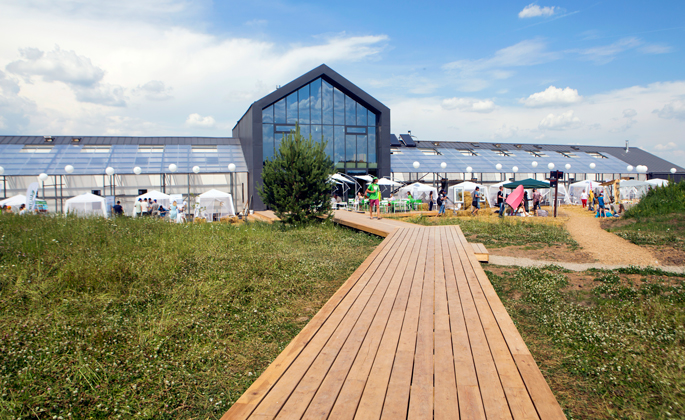 Eko_tektonika is supported by all relevant professional associations and public authorities, both federal and regional, as well as by organizations of the international level, such as the United Nations Environment Program (UNEP), the World Wildlife Fund (WWF), and the Forest Stewardship Council (FSC). Speaking at the opening ceremony were Tatiana Rybkina – the Minister of Natural Resources of Tula Oblast, Elena Smirnova –spokesperson for the Ministry of Natural Resources and Ecology of Tula Oblast, and Olga Burtseva – assistant to the head of the Yasnogorsk District.

The very place where this festival was held – in Yasno Pole Ecopark – assisted in attracting the attention of participants to the importance of the natural component in our lives. On the territory of 500 hectares, they are developing areas related to recreational activities, creative, healthy food, as well as the study and implementation of the most advanced technologies of green architecture and construction.

“Green architecture – is one of the tools that industry has to achieve sustainable development,” noted Svetlana Duving, General Director of ANO NAUR. “After all, it is the architectural and construction industry, and more specifically, the architects and designers who are responsible for creating an urban environment that have the most negative impact on the natural environment. Therefore, the transition to a green building direction should become a crucial step in overcoming the negative anthropogenic human impact on the biosphere, and the transition to an Eco-sustainable path of development becomes the messianic duty of architects and designers.” 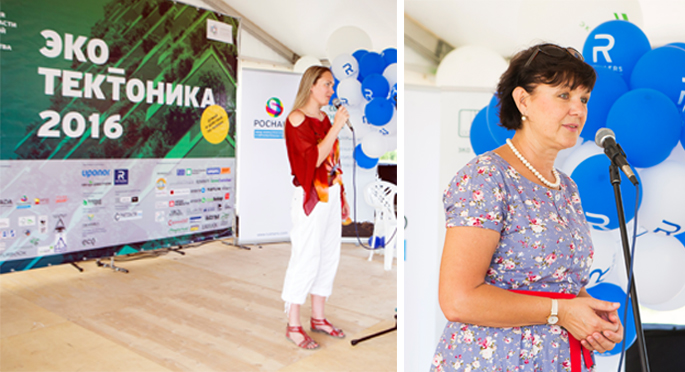 “Over the past year – since the opening of the first and Ecopark Eko_Tektonika festival - our Yasno Pole Ecopark has significantly expanded its infrastructure,” says project founder Dmitry Cherepkov. “We started a guesthouse, a ‘greenhouse hotel and a healthy food restaurant, built a unique children’s playground, began to develop modular homes in the park, built a geo-copula to be able to do physical exercises outdoors. The stables and barn are nearing completion. During the Summer School of Green Architecture, teams of architects erected on our territory eight installations that demonstrate separate aspects of sustainable development. In addition, each of the sites amazingly fits into the landscape of the Ecopark. Separately, we held a contest among the students of the Moscow Architectural Institute, to create a summer guesthouse for the Ecopark, and in the future, several projects will be implemented on our territory. Together with the National Agency for Sustainable Development, we have achieved a great deal. In addition, the festival in 2016 showed that people find our story very interesting and useful. We are pleased that our pool of fans keeps growing! “

Green solutions and technologies are more complex than traditional ones, and therefore, to help people become better acquainted with them, the organizers of the festival developed a special quest game for the guests – the “Human Impact”. This game allows all guests of the festival to take part in a unique competition that tests their knowledge of green solutions, and at the same time – learn about the main concepts of sustainable development. During the festival, an exhibition of green technology is also held, the participants of which offer a variety of tasks and competitions related to the themes of green technologies and sustainable development. At the end of the first day, the winners were determined, who received their deserved awards from the hands of the creative team of Ozhivika, which was entrusted with carrying out the eco-quest. The 1st, 2nd and 3rd place winners of the quest game received as prizes – a free holiday in a Yasno Pole Ecopark Hotel. 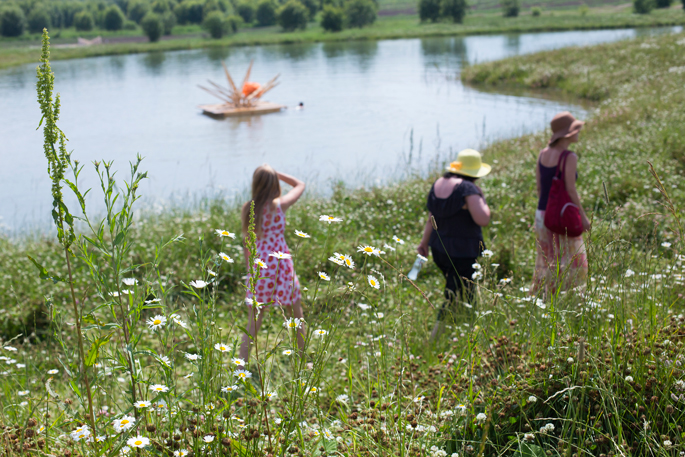 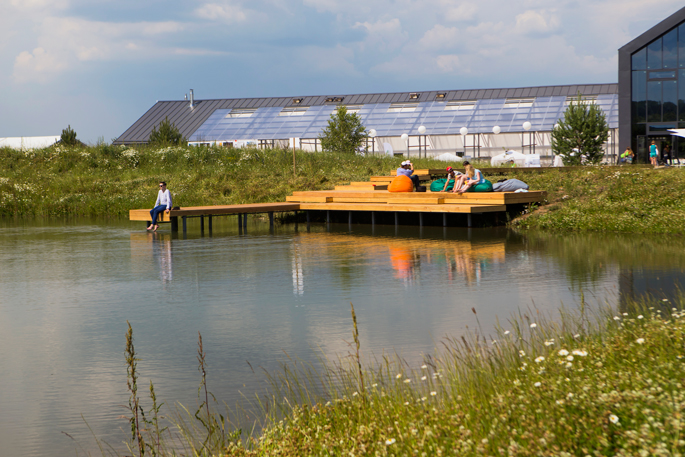 At the end of the first day of the festival, in the central square, awards were handed out to winners of the major national award in the field of ecological architecture and construction – the Eko_tektonika 2016, designed to unite architects who are actively interested in, or are already trying to create green designs. This year the contest received 166 applications from more than 30 Russian regions and CIS countries.

Part of the ceremony included announcing the the overall winners in the special-category of the contest – the “All Clear”, the main prize of which was the right to participate in the Summer School of Green Architecture, which took place a week before the festival on the same site. As part of the school, architects had the opportunity to implement their projects, which were officially presented as part of the awards ceremony, as well as to fully participate in the educational program of Eco-sustainable construction, specially developed by the National Agency for Sustainable Development. 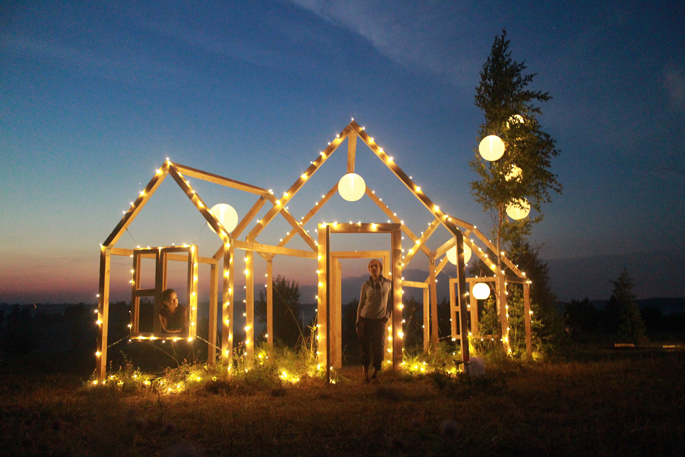 A separate direction of the festival was the unique children’s playground. Near the “greenhouse hotel”, based on modern architectural designs, they built a complex of rockers, swings and a real huge “fair carousel” made from huge logs of Siberian larch. The main “attraction” of the children’s space became the already well-known in the architectural sphere unique installation of “Nests” by the “Leapfrog” Bureau. Moreover, the “Nests”, for the first time were built at a height of 3 meters! 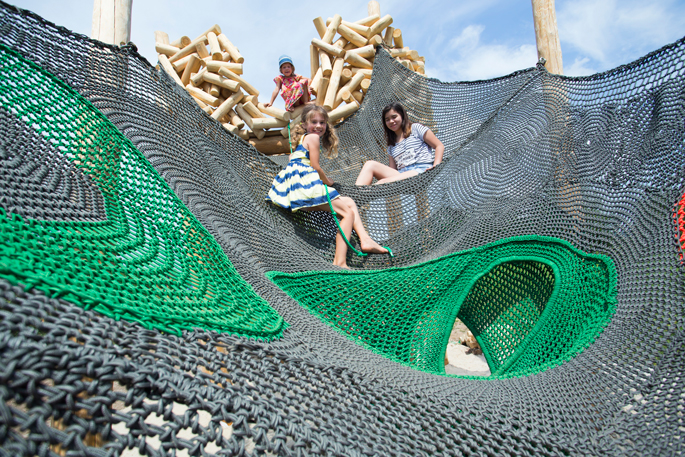 This year, the children’s program of master classes was thematically oriented to work with natural ecological materials, which is also a part of the general idea of the festival – the formation and development of eco-thinking from an early age. Classes are taught to children in Creative Workshops of the Winery Center for Contemporary Art, by teachers of fine arts, potters and painters. Younger guests could make clay sculptures, create a costume from corrugated paper, draw on canvas, learn one-hemisphere art, and build a real model of an adobe house!

Entertainment and relaxation program of the festival consisted of an evening concert of live music. Appearing to entertain the guests was the famous singer Masha Makarova and the wonderful orchestra – “Cush.” On the second day of the festival, master class on yoga and mandala dancing were held. Guests walked around the Ecopark viewing the architectural objects and relaxed near the picturesque artificial lake that was created using the innovative principles of permaculture. 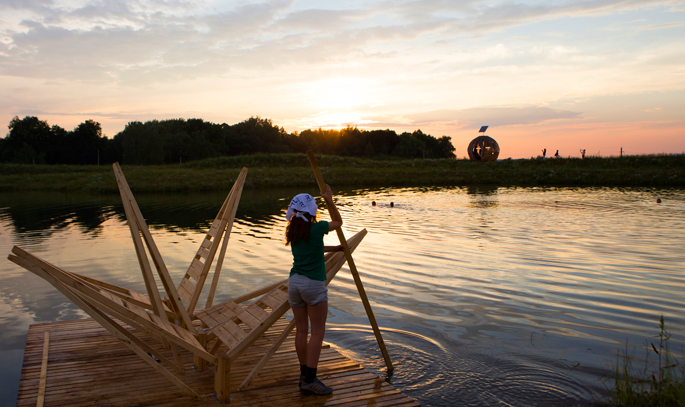 As a result, given the actuality of the main idea of the festival, and the demanded time format of the meeting, the guests and participants of the event received strong positive emotional charges. Some pointed out the correct approach to developing the territory – through bright creative events. Others noted the importance of integrating the community of people with similar values through the ideology of sustainable development and green architecture. While still others pointed out that the idea of sustainable lifestyles and sustainable construction was nowhere to be found in Russia – but now there is a place!