The functionality of NAYADA SmartWall sliding partitions are appreciated even in daycares in the capital city. By the beginning of this schoolyear, NAYADA completed work on equipping five daycare-transformers. The special advantage that these new pre-school institutions offer is – transformable space. Greeting young pupils on their first day at one such institution was the mayor of Moscow, Sergei Sobyanin.

Constructions installed on all floors were very convenient and useful, while the total storage space was doubled. The purpose of these partitions is simple – just one movement and two functionally independent rooms are united into a single space, and vice versa. Thus, a sleeping area is easily converted into a playroom. This solution helps to optimize the interiors of premises, create more groups, including the creation of groups for temporary stay. 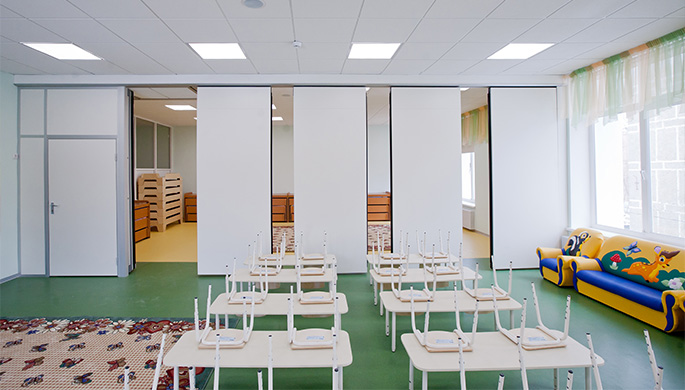 Sliding acoustic partitions are made in sections that are moved on special rollers suspended from ceiling rails, and stored in special storage areas.

We should also mention the technical difficulties that we faced, and that we had to customize solutions for each daycare project. For example, one of the tasks was to attach tracks under concrete girders, and in each of the thirteen partitions we installed, the configurations and locations of the girders were different. Therefore, NAYADA experts designed customized suspensions for each aperture, while trying to keep the track as close as possible to the girders.

On September 1, they opened a total of 13 new daycares and 14 school buildings in Moscow. The new academic year greeted over 1.3 million children in daycares, schools and colleges in Moscow, of which coming for the first time were nearly 100,000 children.

Articles on this topic:

"Evening": On the Day of Knowledge, 13 new daycares and 14 new schools will open in the city

"Construction is in the details": How schools and daycares are built in Moscow