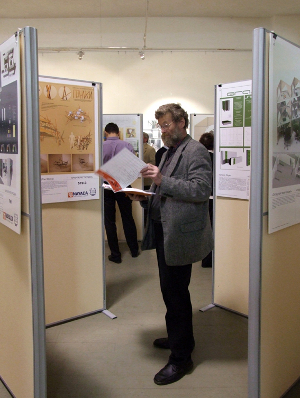 This year Archi contest jury was set a difficult tusk to choose twelve most worthy works from a record quantity of competitive works. High level of preparation of projects was noted by all judges unanimously. It simultaneously complicated a choice and did its more interesting. Pluses and minuses of projects were discussed with enthusiasm and even hazard! Multifaceted jury structure which included known architects, representatives of the developer companies and architectural universities, allowed to give projects a versatile and impartial valuation.

By choosing works-winners jury considered composite of such qualities as brightness of idea and functionality, simplicity and originality of the decision, conformity to modern architectural tendencies and a practicality. After 5 hours of hot debate and discussions jury has made a definitive choice which surprised everybody. Who is the winner will know at award ceremony which will take place at “Izvestia” media centre on October, 30th, 2009.

According to Contest Statement, after jury voting there are known names of authors of projects.

Everyone who wants can visit authors work exhibition at VHUTEMAS gallery till October, 24th, or at www.archiconcurs.ru website.