The Red dot Awards 2008 – the OSCARs for industrial design

The winners of the 2008 Red Dot Awards were announced on 28 November. The prize for the Best of the Best nomination in the office category went to the Japanese designers Noriyuki Shirasu and Toru Sato from the Color Bureau with their Conof. paper shredder. 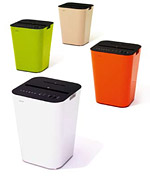 Normally waste paper bins and shredders lead a somewhat solitary existence. In many offices they are hidden under desks and are very rarely great works of design. However, Conof. is the exception to this rule and is really a piece of art. It is nice to look at, has sharp lines and deep colors. Conof. fully blends with modern computers, printers and monitors stylistically, and also has a particular form and style which means it does an A+ job.

Part of the concept design is the icons and buttons which are simple for any user to grasp. Conof. shreds paper, CDs and DVDs. Paper is shredded extremely finely which means the waste basket doesn’t fill up too quickly and disks are shredded silently!

One more product that received an award at the Red Dot Awards 2008 was the Divisio mobile partition system by the Swedish designers Christian Gehri, Ernst Gehri and Marc Gehri. It is a light and transparent system that can divide a room while not boxing it off. The partitions come with a large selection of accessories, among which are book shelves, rolls for posters, drawers and accent lighting. The shell of the partitions is made from aluminum and the panels come in different options, including frosted glass, varnish or veneer – the decision is up to the client.

It was nice to see that one Red Dot prize went to a Russian designer. Karina Eganyan was the winner in the Design Concept category with her ALLinWALL project. The main idea behind it is the creation of partitions that should also hold shelves, paper holders (for different formats like A2, A3 and A4) and boxes for paper reels. Karina Eganyan presented her project at the second International Office space: creation, technology, innovation competition for architects and designers but ALLinWALL failed to make any prize placements. None the less, NAYADA took a serious interest in the project. The innovation department of the company signed a contract with them for further development and production of the concept.

Archicontest Nayada
Us, mediapartner of the award, attends the prize-giving in Moscow
Next

Creation as a principle, Dmitry Cherepkov. president of Nayada group
All materials