Last year Building company, an official dealer of NAYADA received an order to organize the shopping area of Mega trade& entertainment center in Tver. According to the customer's idea, the interior of Mega TEC had to be ultimately transparent and elegant.

Peculiarities of the project

To accomplish this task, NAYADA specialists offered to install a NAYADA-Standart system consisting of sections 2,1 х 2,5 m in size. 8 mm thick glass had to be mounted inside of each section by means of using a covering clip bar.

The work was complicated by the absence of the ceiling, which hadn't been set yet. Instead of the roofing there was a double-pitch roof 8.2 m high (from finished floor up to the comb). Despite those problems the assemblage was carried out according to the schedule, and the project met the deadline. To provide the required stability, it was decided to mount electric trays on metal pins into the thrust between the walls with a spacing 1,5 m. After that the wall holder was attached to the trays.

At the same time the electric trays were used for their intended purpose, that is, for wire installation and mounting of lights. This technology implying the use of electric trays in a room with high ceilings payed for itself not once: NAYADA specialists used it once again at the construction site in Rzhev. In Mega centre the specialists from the Building company installed the original all-glass NAYADA-Crystal partition with a huge sliding door. 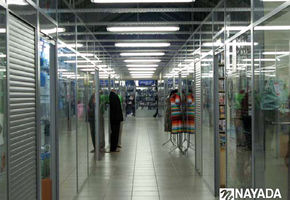 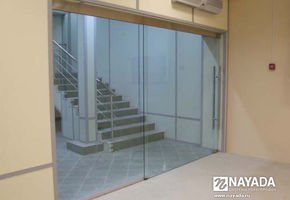